Croshka Siberian Cats and Siberian Kittens is an experienced small home-based breeder since 1994 located in metro Atlanta Georgia. Both licensed with Georgia Department of Agriculture (Pet Dealer License) and USDA Licensed (Class A Breeder) and registered with TICA (The International Cat Association) Cat registry and a member of their voluntary responsible Breeder Program.

Shipping with the airlines is very convenient if needed. Croshka has many different lines of cats from different cat breeders from all over the world including the U.S, Russia and Finland, and Budapest. We specialize in many of the rare Siberian colors.

This cattery will also give a written health guarantee to all kittens and cats. These kittens will all be registered with TICA. Croshka Siberians is licensed with the State of Georgia with unannounced inspections and now licensed with USDA . We are also member with the Taiga Siberian Cat Club.

We have many happy pet owners throughout the country if you would like references. Several times a year we will have retired spayed or neutered adult cats available for adoption as house pets for families to love. We breed quality Siberians for pets. If you have any further interest in our Siberians please contact me and lets talk about you future purrrrrrrrrrrfect family member.

My name Kathy Wade and a true long-time animal lover. I began Croshka Siberian a few years after the first Siberians arrived from Russia. I am one of the few old-time original breeders that are still breeding our Siberians today. My husband and I raised our children on our farm while raising many other exotic animals. For an instant, at the time we had Llamas, mini silky fainting goats, pot-bellied pigs, Wallabies, chickens of all sorts, mini donkeys and cattle. While visiting a farm a lady there gave me a copy of a magazine named Animals Exotic and Small March/April 1994 issue. This is where I first learned of the Siberian Cat and it sparked an interest in the breed. I found a male Siberian kitten from Judy Bender of Colorado, and a bred female Siberian from Elizabeth Terrell who first brought the Siberians here from Russia. I have always strived to maintain healthy, happy, beautiful, loving cats for families to love and be loved back.  All this is history…

History of the Siberian Forest Cat

An ancient long-haired breed now popular in the United States is far from new to the Asian continent and Europe. The Siberian Forest Cat is sometimes referred to as simply the “Siberian Cat”.

Siberians were common cats roaming the Russian markets and the countryside of their homeland of Siberia. Cats were first brought into Russia by Nobles because they were considered to be exotic pets and these cats also played a practical role on farms as rodent control. The domestic cats mated with the European and Asian wild cats (Felis Silvestris) that were already there. Only a few of those cats were strong enough to adapt to the harsh Siberian climate. Russian immigrants carried them as they journeyed to cold Moscow and St. Petersburg leaving the cold inhospitable climate of the North. The breed continued to survive the harsh winters and climate and developed a thick fur and waterproof, oily coat. During this time no one bothered to develop the Siberian into a pedigreed cat. Russia did not allow citizens to own any kind of household pet, pedigreed or otherwise, because of the food shortage.

Despite the fact that the Siberian is a natural breed and is the national cat of Russia, its familiar presence allows it to be taken for granted rather than worthy of note in Russian literature.  Finding written information in Russia is understandably fairly difficult.

Many stories have been told about this breed which we are not sure are true today. The Siberian Cats first appeared in recorded history in the year 1000 AD.  The breed, as it spread throughout Europe, has been documented and mentioned in Russian fairy tales and children’s books. The Siberian’s were also noted in Harrison Weir’s late-nineteenth-century book, “Our Cats and All About Them”, as one of the three longhairs represented at the first cat show held in England in 1871.  The second written proof was in 1925 from the book “Brehms Tierleben” where a stocky longhaired red cat named Tobolsker coming from the Caucasus is mentioned.  Siberians can be found in Russian paintings that are hundreds of years old.

Also in Russian folklore, these magnificent cats made their homes in Russian monasteries.  In the monasteries, they would walk along the high beams and use their speed, strength, and agility.  The Siberians would be on the lookout for intruders, and yet show the monks loyal and loving companionship.  The Siberian is also Russia’s native cat.  With all of this information, we all can see that it is not a new breed to Europe.

In later years after the end of the cold war in Russia, cat clubs became fashionable, and citizens were allowed to own pets.  Many cat clubs developed and one is St. Petersburg Kotofei (pronounced COT-ah-fay), which is a division of ACFA.  Kotofei, named after a fabled Russian character that had the head of a cat, is one of the few Russian cat clubs that extended official pedigrees.  It wasn’t until 1987 that Kotofei was formed and breeding records started being kept.  The first cat show in Moscow was held in 1988. Since then many new cat clubs and registries have developed.

In June of 1990 a Himalayan breeder named Elizabeth Terrell who lived in Baton Rouge, Louisiana, and a materials engineer from Hackensack, New Jersey, named David Boehm both began negotiations with Russian breeders.  Mrs. Terrell was in a cultural exchange of two breeds not known in either region. She had two Himalayans sent to Russia in exchange for some Siberians.  Mrs. Terrell saw a 1988 article in a Himalayan breed publication that asked if any American breeders would be willing to send Himalayans to Russia to help get that breed established there.  Meanwhile, David Boehm had read an article about the Siberian Cats written by a woman in West Germany.  Later he learned that she was coming that year to the States exhibiting two of her Siberians at the ACFA international show.  After speaking to her at the show he decided to go to Russia himself and get some Siberians and bring them back. As he arrived in Moscow three Siberian kittens departed the airport bound for the United States.  The three kittens were being shipped to Elizabeth Terrell. After much searching, he arrived back home with many Siberians of his own. From all of these many long hours and communication with the Russians, the United States now had the Siberian Cat.

THE SEARCH IS FINALLY OVER!!! THE SIBERIAN IS THE IDEAL CAT FOR ALL! 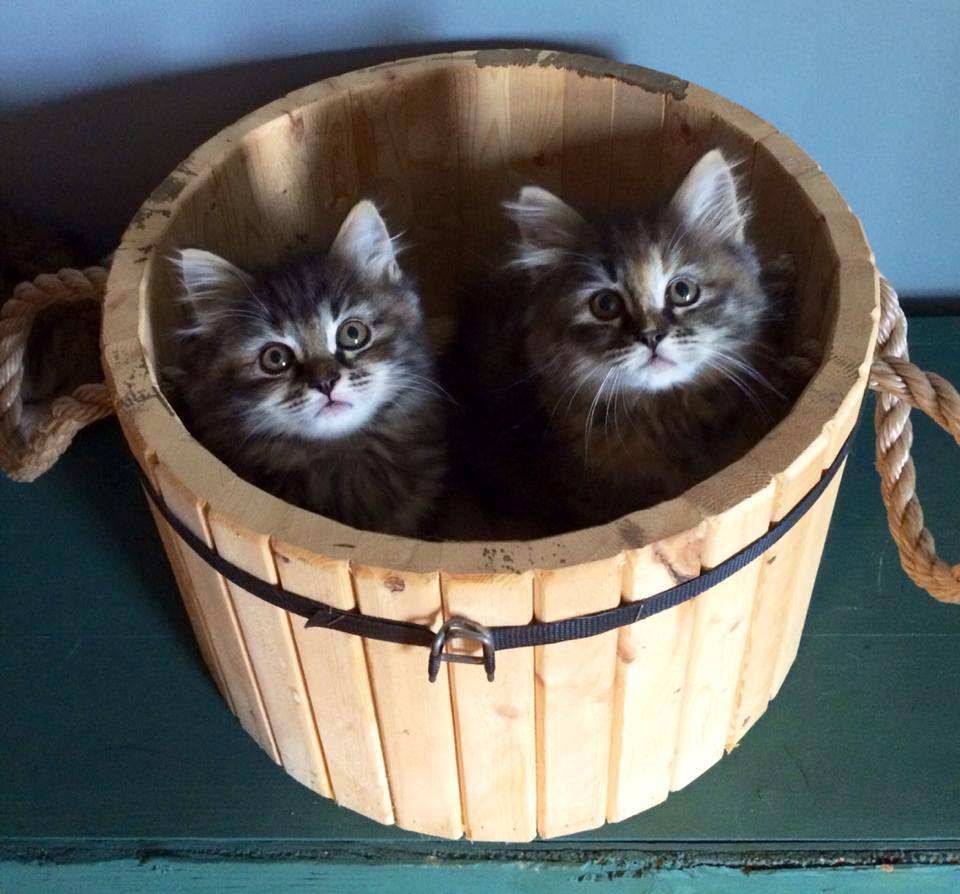 Don’t miss out. Browse our current litter and add a new addition to your family. 🙂